PRIMEVAL X TEASER POSTER RELEASED
The Primeval Site have officially released the first promotional material for the upcoming Primeval 10th Anniversary Special, Primeval X. You can see the Teaser Poster below, and click it to enlarge it to full screen. We will be analysing the poster in this article.

The Teaser Poster is the first official poster to be released, and gives us some major clues and further information regarding the special. We will analyse and pick out the best spots from the poster to see what we can find.

The first important element is the release date, which can be found at the lower section of the poster. It states that Primeval X will be released December 2017, confirming the special will be part of the festive season entertainment. It is unknown whether narratively the special will be set at Christmas, but there is nothing to suggest it as as of yet from anything released.

The main body of the poster includes an X like slash marks, with a saturated red colour pallete shining through. The location of the setting behind the claw marks is unknown, but you can clearly see a sun set, and greenery. It is reminiscent of the Casting Announcement background that has previously been released. The Anomaly is also featured faintly, glimmering in shards upon the sun set backdrop. Accompanying the claw marks is a splat of deep red liquid, presumably blood. This gives a clear indication of the narrative, conveying a sense that Primeval X may follow a darker tone to the TV series, whilst retaining the best Primeval elements. The X claw marks are also clearly part of the new iconography for the special, with the Primeval logo being present, and as opposed to having X in the Primeval font as seen on previous material. It appears these new claw like X marks will be the signifying X (meaning 10, for the 10 years of the shows existence) from here on in. 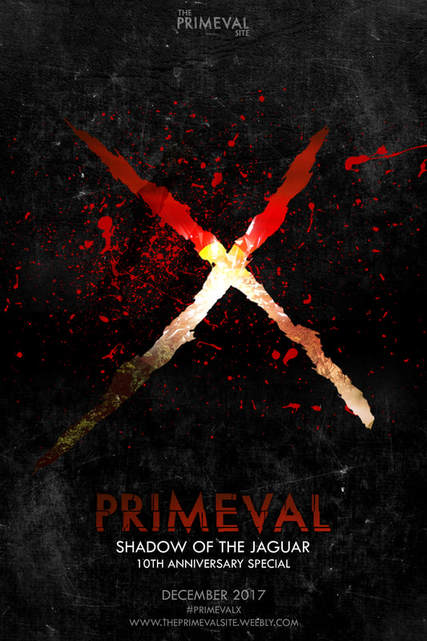 The fact that the poster includes simply the words 'Primeval' as opposed to Primeval X is a choice made to ensure that people recognise the Special as nothing more than just a Primeval Episode. In the same vain as being called Primeval 10, despite being well known as Primeval X, the X is nothing more than a reflection of the 10th Anniversary in Roman Numerals, so it has been replaced as part of the iconography. The special will still be referred to as Primeval X however, as it has became so well recognised under that title. But it must be remembered this is just a Primeval: Shadow of the Jaguar - 10th Anniversary Special. The tagline 'One Final Roar' is also scratched into the texture of the poster, almost crumbling in form.

Owen Price, the producer, was asked about this decision, "As I've said before, the X was nothing more than kind of a production code for the number 10. And, it sounded a lot cooler to present it in Roman Numerals than just 10. People seem to think it's something other than that. It isn't. I remember Watch presenting Primeval Series 5 as Primeval V, it's a similar thing. Yes, the Series is just Primeval, but the V reflects the number of Series. This is still Primeval, but the X represents the number of years. Simple as. So even if the X isn't present on the logo anymore (we will be using the claw mark iconography to reflect the X from now on), it will still be Primeval X in titling, and the hashtag Primeval X plays a big part of people being able to recognise this is the special,"

Other features of the poster are simply what we already have knowledge of. With the title being featured under the Primeval logo (Shadow of the Jaguar) and the words '10th Anniversary Special' also being present. The poster as a whole is pretty simplistic, also confirming what may have already been announced in parts, but ultimately confirming the special will air December 2017. The #PrimevalX is also present, along with a link to this website. The Primeval Site logo and original production company of Primeval, Impossible Pictures, are credited. Although Impossible Pictures aren't actually part of this production, they are credited as they are the original Primeval producers, and deserve credit for the concept and ideas behind the characters.

Ultimately, the Teaser doesn't show much, but does what it's job is. Teases. It is a simple promo, not featuring any characters of any kind. It is unconventional for any Primeval Episode to have a promo of this kind, but the more conventional artwork style posters will surely follow. We can confirm a clean version of the poster, with no text or logos, will also be released as a bonus for people to use as their mobile wallpaper, and for other purposes.